I really enjoyed Randi Weingarten’s speech yesterday at CUNY’s School of Labor and Urban Studies, her central points being:


Unions have lost their power.
Get it back through DENSITY, COMMUNITY, and NARRATIVE.
Turn values into actions.
The strategy is to organize. Catch phrase: “Community is the new Density.”
Slogan: “Organize, don’t agonize.”

And the blue AFT bookmarks they were handing out mirrored the messaging, especially in the second paragraph: “We live in a perilous era of extreme economic inequality, existential threats to our democracy ... opponents aren’t going away ... we are the change agents ... the dreamers and the fighters for a better life, a better world and the soul of America ....”

The whole speech was beginning to sound like the old ICE meetings, when we were hammering out our strong social justice position for the 2010 UFT election.

You can still read the platform on the web.

The “Introduction” alone precedes her remarks by about a decade, so of course I have to re-post a chunk of it here. DOWN BELOW. Am still proud of the work ICE did then and very glad Weingarten’s furthering our fundamental caucus messaging.

By the way, I've included the 3rd- and 5th-paragraph attacks on the UFT’s collaboration in the excerpt below because one can never be sure that the progressive words we heard from Weingarten yesterday represent the actions she’ll actually be taking. They haven’t tended to in the past. After all, leadership’s had a hand in continued class size issues, the whole ATR situation in general, arbitration concessions, a despicable tolerance for rubber room and 3020-a procedures, unremovable grievances, that kind of thing.

I was going to end this post by saying I am pleased with what I heard yesterday from the AFT prez, but then checked back in my archives and found to my dismay she did more of the same progressive-speak in 2009 pushing her new ACES plan: “Active Communities Enabling Success.” 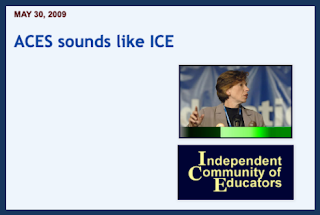 I wrote extensively about that fluffery in a post called “ACES sounds like ICE,” and this morning tried to find out how long she stuck with that plan. A google search produced the message “PAGE NOT FOUND.”

Seems like it was a hat-tip to progressivism then, and this whole production that we witnessed yesterday — though energetic, clever and seductive — may still be just from the same old play book. But she must be getting better at it. I felt happy when I left the meeting.

A chunk of the ICE platform Introduction ...

We believed then and continue to believe now that we cannot afford to be silent on the issues that affect our working conditions, in many cases our jobs, and the future prospects of the children we educate.In these difficult times for unionism across the nation, and with union officials failing the members politically, contractually, and philosophically against a dictatorial mayor [=Trump admin] they continue to back under the present system of mayoral control, we have chosen once again to offer an alternative platform for the 2010 elections.
While we stand with the members of the three other caucuses against outside attacks, the Weingarten/Unity team has weakened the union. Furthering an almost 50-year record of autocratic control, it continues to stifle dissent. More than this, Unity is tirelessly committed to its failed policy of collaboration — with government officials unprepared and sometimes even improperly certified to run this school system and with private organizations that have other agendas. We speak up to make the union stronger and provide an opportunity for any UFT member who is critical of Unity’s stranglehold on policy to get involved. One of our major goals is to bring the entire opposition movement together through this election process.
What continues to unify ICE? The sense that we can be both strong trade unionists and strong educators, that by its very nature, a school is a mini-community, and everyone who works in a school — teachers, psychologists and guidance people, paras, secretaries, administrators, custodial staff, and security agents — has a role in the education of children.
We aim to provide a voice for all UFT members, in particular the classroom teacher, often the most neglected by school administrators and the union staff. These people bear the brunt of the responsibility, and the blame when things don’t go well. We believe that members need to participate in school governance, for it is through grassroots movements that individuals become empowered and active in shaping institutions and the roles of the people working and learning within them. Our union, when it is truly in the hands of members and not a band of misguided and self-interested union managers, can be central to growth of good learning environments.
In the past six years, ICE has developed three functions. The first is keeping up to date with education issues, analyzing and talking about them in the form of essays (in the blogosphere and other media), speeches, videotaping, and forums. They participate in union activities (such as running for and serving as chapter leaders and delegates, attending meetings of all kinds, and studying the contract and other laws) and share their knowledge and experience freely with any union members who ask them for help. Lastly, ICE members are activists, who stand strongly against the many inequities in our learning communities. They mount and/or participate in demonstrations of all kinds, particularly against the ATR situation, rubber rooms, charter schools, and war.