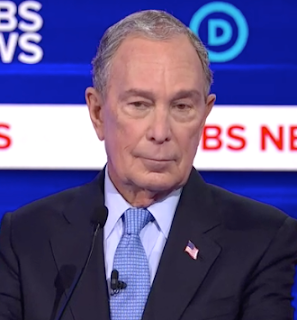 This is really too much.  Let’s take a look at what this guy really think about teachers.


Bloomberg embodied an aggressive free-market ideology with policies that were contrary to research and hugely disruptive — in the worst sense of the word. Far from the benevolent, pragmatic centrist his campaign likes to portray,  Bloomberg and his chancellors reigned over NYC public schools for 12 years with an iron fist, autocratically imposing destructive reforms with little concern for how they upended the lives of communities, students and teachers.
[Leonie refers to an “explosive video” of Bloomberg here.]

And I don’t know how I missed this one the other day, but more critique in the Indypendent from NYC teacher Julie Cavanagh: “A Teacher’s Story: How Bloomberg wreaked havoc on my ‘A-rated’ public school” (Feb 2020)

Yet all that offered no immunity when our school became one of the first targets for a “co-location,” installing a charter school in the same building as a public school. This wasn’t just any charter school. It was an education corporation run by Spencer Robertson, the son of hedge fund billionaire Julian Robertson. The elder Robertson had donated generously to Bloomberg’s education initiatives and was, like the mayor, a national player in promoting the corporate school “reform” agenda — pushing high-stakes testing, closing public schools, co-locating charters with well-performing schools and attacking teachers’ unions, while cutting funding to our public schools.

Bloomberg: “If I had my way, I’d dump half of NYC’s Teachers”, subtitle:  “Mayor stuns many at MIT speech, says he’d greatly enlarge class size, too“ (CBS reporting, Dec 2011)


“Education is very much, I’ve always thought, just like the real estate business. Real estate business, there are three things that matter: location, location, location is the old joke,” Bloomberg said. “Well in education, it is: quality of teacher, quality of teacher, quality of teacher. And I would, if I had the ability – which nobody does really – to just design a system and say, ‘ex cathedra, this is what we’re going to do,’ you would cut the number of teachers in half, but you would double the compensation of them and you would weed out all the bad ones and just have good teachers. And double the class size with a better teacher is a good deal for the students.”

Leonie Haimson and Diane Ravitch: “The education of Michael Bloomberg“ (May 2013)


Unfortunately, his claims of closing the achievement gap proved misleading. On the reliable national assessment known as the NAEP, there had been no significant increase in scores or narrowing of the gap since 2003, when the mayor’s policies were first imposed. In 2010, the state Education Department finally admitted what observers had long suspected: that the state exams had become overly predictable and that scoring well had grown easier over time. After New York State acknowledged that test score inflation had occurred, scores across the state were recalibrated and declined dramatically. The achievement gap was revealed to be as wide as it had been before Bloomberg implemented his policies. The black-white test proficiency gap in eighth-grade reading actually increased.


Like Trump and his inept secretary of education, Betsy Devos, Bloomberg is a fervent backer of privatizing and dismantling public schools across the country. Education, in their view, should be run like a business.
While other establishment Democrats have begun changing their tune in response to the “Red for Ed” movement, Bloomberg’s campaign spokesman has made it clear that privatization will be a core message of his 2020 presidential run.


Former New York mayor and Democratic presidential hopeful Michael Bloomberg has long been a vocal critic of the National Rifle Association, which he has called both “shameful” and “dangerous.” ... In a video of remarks Bloomberg made while still mayor of New York, obtained by Politico, he can be heard likening the American Civil Liberties Union and the New York City teachers union to the NRA.


New York City teachers are vocal critics of Bloomberg, who not only used public money for school privatization but usurped the power of elected community school boards as the state granted Bloomberg “mayoral control” of New York City schools in 2002.
Bloomberg proceeded to appoint corporate attorney Joel Klein as head of New York City’s education department. Klein began a “test-and-punish” regime, which led to the closure of 150 schools and earned him an 80 percent disapproval rating with teachers.

And of course read ANYTHING in these blogs — including mine — during the Bloomberg years: