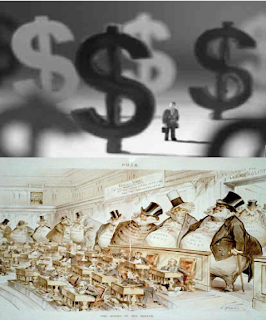 If something is going to appear in perpetuity as the final post on this blog, it may as well be something of substance.

Here are three things of substance, and they all have to do with what happens to the citizenry when a country is overtaken in war or by coup.

Chris Hedges has an essay in truthdig.com on the Huxley/Orwell dystopia that America has become.


Orwell warned of a world where books were banned. Huxley warned of a world where no one wanted to read books. Orwell warned of a state of permanent war and fear. Huxley warned of a culture diverted by mindless pleasure. Orwell warned of a state where every conversation and thought was monitored and dissent was brutally punished. Huxley warned of a state where a population, preoccupied by trivia and gossip, no longer cared about truth or information. Orwell saw us frightened into submission. Huxley saw us seduced into submission. But Huxley, we are discovering, was merely the prelude to Orwell. Huxley understood the process by which we would be complicit in our own enslavement. Orwell understood the enslavement. Now that the corporate coup is over, we stand naked and defenseless. We are beginning to understand, as Karl Marx knew, that unfettered and unregulated capitalism is a brutal and revolutionary force that exploits human beings and the natural world until exhaustion or collapse.


behind the smokescreen of the public relations industry, the entertainment industry and the tawdry materialism of a consumer society, [and] devours us from the inside out. It owes no allegiance to us or the nation. It feasts upon our carcass ... It is defined by the anonymity and facelessness of the corporation.

His whole essay is as frightening as it is true, and it's hard to keep from getting caught up in the sham.


The other two items of substance are two short books on what happens when "the enemy" actually arrives. 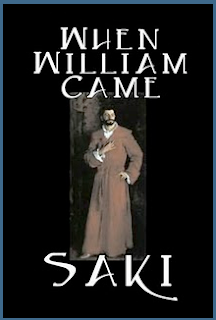 Saki's When William Came is an example of "invasion literature," which Wiki describes as "tales that aroused imaginations and anxieties about hypothetical invasions by foreign powers." Saki's little novel is hypothetical. Written a year before the start of WWI, he imagines what it would be like once the victorious Germans arrive and work their way into British society. Some, he shows us, would accommodate them, others would find refuge in untainted towns and villages.

Parenthetically, I have to get a hold of P.G. Wodehouse's short novel The Swoop!, which some feel is a parody of the whole genre. Wodehouse invents a Britain defending itself against 9 simultaneous invaders. As I see it, such an invasion has already taken place in America. I can think of 9 very real enemies right off the top of my head that have soiled our national values: the regulatory agencies, the Patriot Acts, endless (unauthorized) war, Guantanamo, Citizens United and the Roberts court, hedge fund managers and the complicit banks, the party of No, the Christian Right, and tax cuts for the super rich. Why not throw in Ed Deformers for good measure.

Bottom line: We don't need any foreign-power hypotheticals to imagine what a takeover culture would look like in this country. Plutarchy — rule by the wealthy mixed with rule by the few — is already well underway on American soil.


A third bit of substance,

A Woman in Berlin, is by an anonymous female reporter who took meticulous notes on what happened to her and the people in her building during the 9 weeks at the end of WWII when the Red Army took over. It is not fiction. In horrifying detail she describes the invasion of body (rape) and personal space against a background of widespread deprivation.

I mention this book because when a country undergoes dramatic changes, each individual is forced to journey through a spectrum, from scenarios he may imagine, through incremental changes he may find acceptable to progressively unsettling discomforts, and eventually to horror, terror, and breakdown.

Understanding what's happening to us does not make living through a cultural/political coup any easier. Until the going gets really tough here in this country — and I am certain it will — we're dealing with mass avoidance and widespread ignorance.

Getting a handle on the nature of this spectrum as it plays out is a serious task. As Hedges says:


The façade is crumbling. And as more and more people realize that they have been used and robbed, we will move swiftly from Huxley’s “Brave New World” to Orwell’s “1984.” The public, at some point, will have to face some very unpleasant truths ...

The noose is tightening. The era of amusement is being replaced by the era of repression. Tens of millions of citizens have had their e-mails and phone records turned over to the government. We are the most monitored and spied-on citizenry in human history. Many of us have our daily routine caught on dozens of security cameras. Our proclivities and habits are recorded on the Internet. Our profiles are electronically generated. Our bodies are patted down at airports and filmed by scanners. And public service announcements, car inspection stickers, and public transportation posters constantly urge us to report suspicious activity. The enemy is everywhere.

The enemy is everywhere. What a thought.
By Under Assault at 8:47 AM 1 comments