A coalition of healthcare professionals, unions and activist groups will picket the annual conference of
the New York Health Plan Association (NYHPA ), a trade association for the state’s health 1    insurance
companies, in Troy, NY on November 15. The conference theme is “Decision 2018: The Intersection of
Health Care Policy and Politics.” NYHPA is a leading member of the misnamed "Realities of Single
Payer" coalition,2    whose mission i s to defeat the New York Health Act, which would set up a universal,
single-payer, publicly-financed healthcare system covering all New York residents without cost barriers.
(More on the Health Act at nyhcampaign.org .) The coalition has been employing lies, distortions and
scare tactics to preserve their profits, which would largely be dismantled if this bill passed.

The coalition’s leading force is the Business Council of NY State (BCNYS), a powerful lobby group led
by mega-corporations from the insurance, pharmaceutical, and manufacturing industries, with close
ties to right-wing think-tanks and lobby groups funded by the Koch Brothers and other billionaires. For
example, Unshackle Upstate, a lobby group claiming to represent the interests of upstate New Yorkers,
not only fights single payer, but also supports environmentally-destructive fracking by the oil industry
and opposes increasing the minimum wage -- all in the name of improving economic opportunity
upstate. 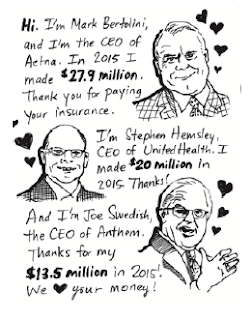 Leaders of the "Realities" coalition and national corporate opponents of single payer are on the conference agenda, including:

All of these lobby groups represent giant corporations with
outlandishly huge CEO salaries (see examples at left) and
some of the world’s highest profit rates.

Last year CNBC reported that “the nation's top six health
insurers reported $6 billion in adjusted profits for the
second quarter. That's up more about 29 percent from the
same quarter a year ago — far outpacing the overall S&P 500
health care sector's growth of 8.5 percent for the quarter.”3

Falsehoods and Distortions by NYHPA and Its Mega-Corporate Allies

● The NY Health Act would impose burdensome taxes on taxpayers
NYS single-payer opponents often point to the recent RAND Corporation report on the Health Act (commissioned by the NYS Health Foundation) to justify the claim that a single-payer system would put an undue burden on taxpayers. Briccetti often emphasizes the report’s finding that a single-payer system would require $139 billion in new state taxes in 2022, rising to $210 billion in 2031, which she has labeled “the largest state tax hike in U.S. history.”4

Crucially, these and other anti-Health Act commentaries misleadingly claim that these new taxes would be burdensome and that a single-payer structure would limit rather than expand care. Opponents conveniently leave out these key findings of the RAND study:

● The vast majority of New York residents would spend less overall on healthcare;● New taxes would effectively replace premiums, deductibles, and other prohibitive fees levied by insurance companies, which often limit access to care even for the insured; and● In a single-payer system, the government and its residents would spend a larger portion of  current medical outlays on actual healthcare (by cutting out administrative waste, inflated drug prices, insurance marketing and profits) and fully covering more people and services than under the current system.5

Further, opponents deliberately ignore the significant finding that with a single-payer system, overall

healthcare spending would decrease in the state, even as coverage and access to services grow.
These critics selectively emphasize the necessary transfer from expensive, regressive premiums to
affordable, progressive taxes that for most residents will be lower, in order to scare the public and protect their profits.

● The Health Act would destroy jobs
Another common falsehood promoted by opponents is that the Health Act, as Briccetti of BCNYS
phrased it, “ would be devastating to the economy." Yet the RAND report estimated that overall, with the uptick in residents whose healthcare costs are covered and reduced insurance costs to businesses and nonprofits, statewide employment would increase by 2%, producing some 150,000 new jobs by 2022. It also found that small and medium-size businesses would see major savings in healthcare costs when comparing the potential payroll tax rate to current insurance premiums.

● The Health Act would remove patients’ healthcare options
Earlier this year, NYHPA issued a statement claiming that the Health Act “would take away options currently available to seniors and other New Yorkers.” Yet the opposite is the case. Under the bill, all types of medical care -- physical and mental health, dental, vision, and hearing, would be 100% covered for all NYS residents. Those on Medicare would receive improved benefits, while spending much less than they currently do on care. All patients would have the choice of any healthcare provider -- the currently rampant narrow networks would be abolished. The only “option” taken away would be the option of purchasing a grossly inadequate insurance policy with gigantic deductibles and copayments and ever-rising premiums that leave millions of New Yorkers unable to meet their other basic living expenses and drive some to bankruptcy.
_______________________________________
4 https://blog.timesunion.com/capitol/archives/283973/anti-ny-health-act-coalition-grows-in-new-york/
5 https://blog.timesunion.com/capitol/archives/283973/anti-ny-health-act-coalition-grows-in-new-york/
https://www.vox.com/policy-and-politics/2018/8/3/17648860/single-payer-explained-3-charts

The willful misrepresentations of the RAND study by “Realities of Single Payer” coalition members are in line with these same forces’ lobbying efforts over the years. Their primary objective of protecting their profits is reflected in their repeated attempts to block further taxation and regulation of their industries and, in the case of the insurance industry, to avoid expanding coverage for needed services.

In particular, the New York Health Plan Association (NYHPA) and the Business Council of New York State (BCNYS), have spent years lobbying against other legislation and regulations that would improve healthcare access and corporate accountability and reduce price-gouging and excessive profits in the healthcare sector. Some examples:

● Sued the NYS Health Dept. when it tried to: (1) cap executive health insurance salaries at $200k when their companies received state funding, and (2) penalize all health insurance providers that pay their execs upwards of $200,000. NYHPA’s lawyers claimed that the penalties 6 were “arbitrary & capricious.”7

● Earlier this year, Gov. Cuomo proposed a 14% tax on health insurance companies’ profits to help ameliorate the state’s $4.4 billion deficit. NYHPA opposed this and threatened that it would lead to higher costs for consumers.8

● In August, after the insurance industry requested rate increases averaging 24%, the NYS Financial Services Dept. slashed the amount by two-thirds, to 8.6%.9 Gov. Cuomo said the massive hike would have resulted in an average $1,500 increase per policyholder. NYHPA opposed the decision and called the requested price hikes “reasonable.”10

● Also opposed Cuomo’s 14% proposed tax on insurance companies, of which $140 million was to be spent on vital healthcare services to make up for federal Medicaid cuts.11

● Opposed a state bill that would have required for-profit health insurance companies to pay out revenue realized as a direct result of Trump’s “Tax Cuts and Jobs Act of 2017” to consumers in the form of rate reductions. Health insurers benefited from the decreased federal corporate tax rate (from 35% to 21% in 2018), but that didn’t translate to lower rates for consumers.12

● Opposed a proposed $25 million expansion of Community First Choice Option, which allows low-income NYS residents to receive long-term personal care services and support for independent living in their home and community, rather than require institutionalization such as nursing-home placement.

● Opposed the implementation of a “covered lives assessment,” which would have mandated private insurance coverage of EI (Early Intervention) services delivered to children with special learning and developmental needs in NYS.

● Opposed the State’s proposal to mandate that pharmaceutical companies create drug take-back programs designed to help alleviate the opioid crisis. They claimed, among other things, that this would “increase drug costs for consumers.”15

● Opposed a bill that would have mandated expanded coverage of contraceptives, including emergency contraception and sterilization.16

● Opposed a bill to create safe-staffing requirements for nurses in NYS hospitals. These requirements are designed to improve patient and nurse safety by making sure that no nurse is assigned to too many patients at a given time.