Thunderous applause for Bernie, from Naomi and Noam 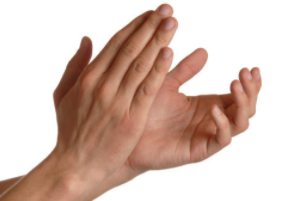 And Naomi Klein says exactly why.

Here are some mostly quoted, partly paraphrased and clipped remarks from her interview with Amy Goodman on Democracy Now this morning (starting at 03:41): 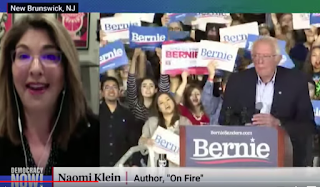 She mainly wishes to express her HUGE gratitude to Sanders and everyone involved in his campaign who opened up the window to what is possible politically ...

More than anything else, what the campaign did is HELP US FIND EACH OTHER. And he did this not just now but also in 2016, where he really broke the spell of the Reagan era — that spell that has lasted for four decades, that told people who believed that this system that was funneling so much wealth upwards and spreading insecurity, precariousness and poverty and pollution for everybody else, everybody who saw that system and thought there was something deeply wrong with it ... what the Sanders campaign did is tell us that we had been lied to ... the organizing wove this amazing web and we were able to find each other and find that we were many and they were few.

You can simultaneously win the battle of ideas and still believe that you will never actually win, that you are still a weak minority, that you will still be destroyed by the forces of establishment power and money.  And that, I think, is the real generational divide that Bernie was also speaking to in his address ... the “younger” voters were starting to believe they could actually win ... they understood that the intellectual project of neo-liberalism was bankrupt ... and these words like “Democratic Socialist” were not as scary anymore.  In fact, they had become appealing.

For the older generation ... when Bernie’s opponents raised the specter of the Red scare that would be used against him, that was incredibly triggering, terrifying ... Progressive voters who agreed with Bernie could not believe that he could win, where younger voters did believe that he could win. And that was the most important generational divide.

The way this pandemic is playing out is further opening up that window of what is politically possible, indeed what is necessary for people’s survival. And yes, support for Medicare for All is surging, as well as support for other kinds of programs like Housing for All, that were always at the center of the Sanders campaign.

In the next few months, we are still able to make ourselves heard in sending a very clear message to Congress that people are enraged by this bailout, and the fact that these meager strings that were attached to the corporate bailout were immediately snipped by the Trump administration in terms of oversight ... watchdogs ... giving Mnuchin the ability to override that oversight.

I think that the battle, when it comes to disaster capitalism in this corporate free-for-all under cover of pandemic, that that battle was lost when the rescue for people was bundled together with the corporate bailout. The demand we need to make on lawmakers right now is to keep those things separate.

The fact is:  there is power right now, there’s power from the working people who are holding the world together ... we’re seeing a wave of job action from these workers who understand themselves to be so essential despite decades of having their labor belittled by those in power.  That was one of the great strengths of the Sanders campaign, that he always recognized the power of those essential workers ... people who recognized Sanders as their champion from the very beginning.  Let’s trust them, and let’s do everything we can to augment their political power.
___________________________________ 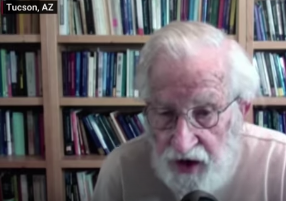 Amy continues with a bit of video from Noam Chomsky :  “If Trump is re-elected, it will be
It’s common to say now that the Sanders campaign failed.  I think that’s a mistake. I think it was an extraordinary success. Completed shifted the arena of debate and discussion that were unthinkable a couple of years ago are now right in the middle of attention.

Full interview with him on Democracy Now Friday.