Bernie's Workplace Democracy Plan —
Medicare for All is right in there 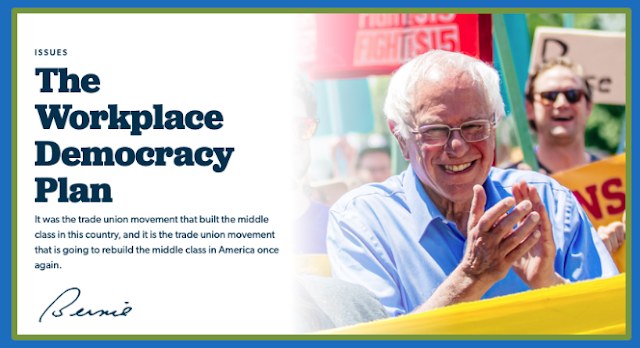 Most union members really fear losing their negotiated coverage if Medicare for All becomes law, and I can understand why.

I'm on Medicare, and like all other retired workers in NYC, we get our Part B and D premiums (plus the surcharges for higher incomes) refunded each year.  Wouldn't want to lose all that.

Medicare only pays for part of your healthcare costs. The leftover deductibles, co-pays, co-insurances, and premiums are handled to a greater or lesser extent by one of the city's retiree Medicare plans. (Yes, we have a choice).  I am in an Advantage Plan type, an HMO, but could easily switch to the Medigap kind (like GHI) every two years.

And for a little extra money each month, I get some extra benefits from the union's Supplement Health Insurance Program (SHIP). There's no question that these are great.

Am I also happy that this insurance will never go away?  Yes.
And that there's so much coverage?  Yes.
And that I can switch from one type of plan to another every couple of years?  Sure.

But, am I happy that we're still paying for redundant administrative costs and the huge salaries of insurance industry execs?  No.
Or the costs of overpriced drugs? Definitely not.

Or having the increasingly present inconveniences and iffiness of prior authorizations for so many procedures?  No again, and simply horrified at this transparent attempt by insurance companies to limit the benefits I'm supposed to be able to get.


It's one thing to be generally happy with your union coverage and still be clear-eyed about the enormous waste, the not so admirable corporate goals, and the actually harmful practices of the industry as a whole


That's why it's important to spread the word about Sanders's Workplace Democracy Plan, which describes how he plans to interface with the unions during the phasing in of Medicare for All. Scroll way down to the bottom at this link.


• A fair transition to Medicare for All:  Bernie will require that resulting healthcare savings from union-negotiated plans result in wage increases and additional benefits for workers during the transition to Medicare for All. When Medicare for All is signed into law, companies with union negotiated health care plans would be required to enter into new contract negotiations overseen by the National Labor Relations Board. Under this plan, all company savings that result from reduced health care contributions from Medicare for All will accrue equitably to workers in the form of increased wages or other benefits.  Furthermore, the plan will ensure that union-sponsored clinics and other providers are integrated within the Medicare for All system, and kept available for members. Unions will still be able to negotiate for and provide wrap-around services and other coverage not duplicative of the benefits established under Medicare for All.

This is a really heavy lift, and people in general don't trust that the government (this one in particular) will get any of it right. Look at all the things this plan calls for:


But I have to keep saying:  All social programs take a long time to build and involve risks.

Take Social Security, for example. It needed a stock market crash and the Great Depression, as well as Share Our Wealth clubs in every state, Townsend's old-age pension plans (which disappeared in 1950, a full 15 years after it was launched), and many other pension schemes before and during the creation of the national Social Security program in 1935. Then the Social Security Board had to be established, which was funded in 1936, became a cabinet FSA agency in 1939 and replaced the current SSA in 1946.  Lump-sum payments started in 1937, monthly payments were to begin in 1942 after the Trust Funds could be built up.

Still no health benefits for decades. Medicare was established as Title XVIII of the 1965 Social Security Act, 30 years later.

Bernie's Medicare for All legislation will also not happen immediately.  But it MUST happen, if people are not to be diddled interminably by a couple of out-of-control industries, tethered to jobs in fear of losing their insurance, or living without insurance altogether.  It MUST happen if we don't continually want our laws written up by lobbyists and adopted by amoral elected officials.

Medicare for All is the only way to go, but we must allow the process to start, and we must have the fortitude and patience to get the complexities sorted out in the conversion.