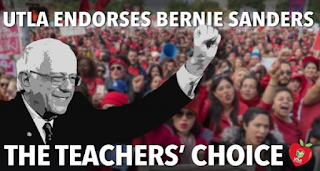 Last week the elected leadership of that 34,000-member union voted 80% to endorse Sanders — “capping the most comprehensive member engagement process that UTLA has ever conducted for a political candidate.”  (Wow.)

“Thursday’s House vote followed a six-week discussion at school sites.”  (They do that over there?)


"More than 500 elected site representatives voted 72.5% yes to the presidential endorsement” of Sanders at nine regional meetings.  (Starting to get angry.)

The quotes are from the union’s website, which includes this from their president, Alex Caputo-Pearl:

“Why now, and why Bernie? Because we want him to win in the primary election and because we need an unapologetic, longstanding ally of progressive policies to make public education a priority in the White House. Sanders is the first viable major candidate in 25 years in the Democratic Party to stand up against privatization, the charter billionaires, and high-stakes testing and to stand up for a massive redistribution of wealth to schools and social services. Critically, like UTLA, Sen. Sanders believes in building a national movement for real, lasting change.”

The deal breaker over here is that bit about Sanders being a “longstanding ally of progressive policies,” because our leadership, alongside its decision to never ever poll the rank and file on endorsements, isn’t interested in progressivism. They may borrow the terminology from time to time to gain some points with us lefties, but not much really translates into the kinds policies we’d favor. I mean, the UFT still has its own charter school and boasts of its “organizing efforts of NYC’s charter educators through the UFT Alliance of Charter Teachers and Staff.” Condoning the charter movement’s direct threat to public education doesn’t seem progressive to me. More like accommodation.

Keep these endorsements coming, Bernie. Maybe you'll find some needles here in the NYC unions that can be moved.
_______________

PS:  There are more details on the about this endorsement (timeline, links to commentary elsewhere, the Nurses endorsement) over at Ednotes.