American healthcare —
our own brand of Sophie's choices 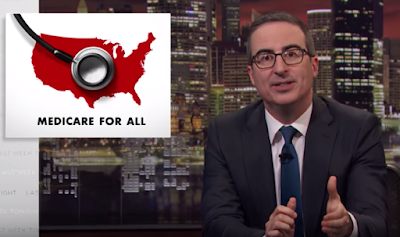 Revised somewhat below, but see also Ednotes, where Norm talks about healthcare and the unions. We all have to keep digging into that issue.

I was wondering when John Oliver would get around to explaining Medicare for All, and here he is a couple of days ago.

I appreciate his joking around, don't get me wrong. But, he makes some serious points about the simply fabulous choices we'd have to give up if we go for single-payer.

The current "choices" in our system are actually quite dire if you happen to live in the wrong state, or have a pre-existing condition, or just don't make enough money to cover the bills.

Oliver's examples (starting around 14:00) are grotesque and should never be allowed: 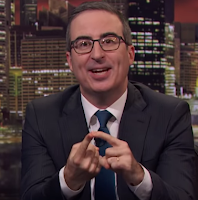 1.  Should you call an ambulance in a serious emergency or get a friend to drive you?

2.  Which hospital are you going to head for, the one in your plan or the closer one?  And what will you do if the doctor on duty is not in your plan?

3.  How about which medication will you choose, the one that'll keep your faulty heart from totally giving out or the diabetes that'll take longer to kill you?

That's where he says:  "A humane health system should not require people to pick their favorite organ."

I've heard of other choices people are making every day:


Which bills to pay, food or prescription drugs?

Which job to take, the one with healthcare, or the one I really want?

Which state should I live in to get the best coverage?

How about this for Sophie's choice: Should I help pay the meds for one of my adult children over another?

All in all, that's where I agree with Oliver when he says the American system is truly "the Kama Sutra of healthcare."


So many choices, but all the wrong kinds.