Bernie gets it, our union leaders just ... won’t 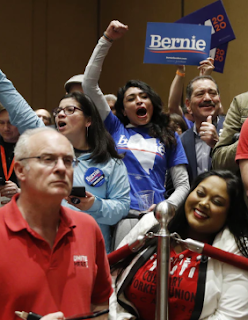 Here’s the reasons many union workers want to see Medicare for All happen:

1.  They have coverage through their job, but their friends and relatives don’t.

2.  They worry what happens if they lose their jobs.

3.  With healthcare discussions off the table, union leaders can negotiate for other things. As Bernie said this week (as per Common Dreams a week ago):


“Many, many unions throughout this country ... absolutely understand that we’ve got to move to Medicare for All ... and the reason is ...  they spend half of their time arguing against cutbacks for the healthcare that they have.

“When everybody in America has comprehensive healthcare ... unions can then negotiate for higher wages, better working conditions, better pensions.”

4.  Some ed activists speculate that union admin jobs could be eliminated if healthcare administration were to migrate to a government platform.

Regarding this last point, the UFT Welfare Fund handles some of our health coverage, the parts that are supplemental to the city’s plans. It says on its website that it’s a “unilaterally operated trust fund” administered by a 5-person board of union trustees. An executive director and an unspecified number of staffers take care of its day-to-day operations. (I’ve been reminded more than once that these are patronage jobs.)

Here’s a paragraph on the board’s powers that probably very few in the rank-and-file ever knew about, including myself:

So, not only are our jobs, working conditions, and pensions intertwined with our coverage, but some of that coverage — bartered away for lower wages and quite a few regressive working conditions — could easily be modified or taken away altogether. That’s rather unsettling.
This tying of healthcare to jobs has got to stop.

Back in October I posted a list of unions backing Medicare for All, and Sanders lists a bunch of union endorsements on his website, claiming in the last debate he’s got more of them than any other candidate. Several of the unions listed are teachers: American Federation of Teachers, United Teachers LA, United Teachers Richmond, and Washington Teachers.  The UFT is not one of them.

Some reporters suggest that the Medicare for All debate is “fracturing organized labor, sometimes pitting unions against Democratic candidates that vie for their support” (here).


It’s a discussion at every single bargaining table, in every single union shop, every single time it’s open enrollment and people see their costs going up,” said Sara Nelson, president of the Association of Flight Attendants, a vocal single-payer advocate and one of a number of union officials who spoke to the divide.

But what they seem to be missing is absolutely addressed in the proposed legislation:


When Medicare for All is signed into law, companies with union negotiated health care plans would be required to enter into new contract negotiations overseen by the National Labor Relations Board. Under this plan, all company savings that result from reduced health care contributions from Medicare for All will accrue equitably to workers in the form of increased wages or other benefits.  Furthermore, the plan will ensure that union-sponsored clinics and other providers are integrated within the Medicare for All system, and kept available for members. Unions will still be able to negotiate for and provide wrap-around services and other coverage not duplicative of the benefits established under Medicare for All.

I’m glad the culinary workers and others local union members are speaking out against their leadership’s resistance.

I don’t see much of a shift yet, but two weeks ago, I wasn’t sure if Bernie had the wind at his back to take three states in a row.