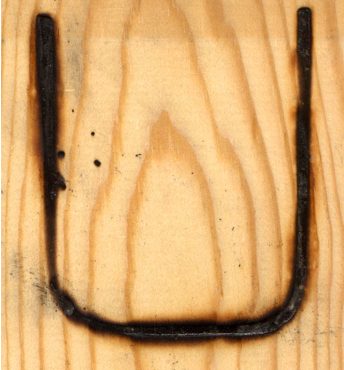 It's that time of year, folks, and over at Ednotes you'll see a bunch of questions someone's asked about U-ratings.

The comments are informative, as are some other responses Scott got in private emails. (Not everyone, it seems, wants to explain their personal experiences publicly.)

The first one quotes from two documents listed by Untamed Teacher as five items all of us should have on hand:

3) Principal Performance Review [maybe they're referring to this Reg]

4) The Appeal Process [pdf of the Reg here]

5) Teachers' Guide to Serving in the NYC Public Schools [until I find this one, here's a link to the DoE website for teacher guides, regs, and manuals]

The person says that your salary freezes when you get a U. The manual is not all that clear (see p.13 of the pdf), but I've heard people say just the steps freeze, not the longevity increments at 10, 13, 15, 18, 20, and 22 years. Once you start getting S's again, your step increments continue from where they had left off.

In the same document, I love the first bullet point in the section "Writing Formal Observation Reports" (p.20 of the pdf), where it says that "a major objective of a written report is that it be effective in improving teaching without reducing morale." Heck, all this time I've been thinking the ONLY major goal of a written report was to improve teaching without reducing morale. I wonder what the other objectives are?

Tangentially, we're all suffering from this cookie-cutter evaluation system, whether our observations are deemed satisfactory or not. Once Klein decided that principals were incapable of writing their own evaluations from scratch (!), we lost the ability to see in print just how unqualified so many administrators are in executing their own tasks. That's a bias in their favor, and the UFT should have made much more of a fuss about these template evaluations.


Someone also sent in an excerpt from a 2007 revision of a DoE supervisory publication pp.53-4 of the pdf). It describes the "informal" observation thus: 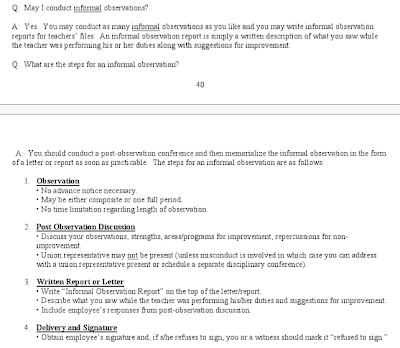 Other answers Scott received in private emails include the following colorful submissions, the first from a CL:

The UFT Boro Office needs to contacted immediately and the DR should be notified that teacher wants to appeal.....yes it applies to tenured teachers. . . .

I have truly lost all hope that teachers in this situation will actually be helped but teacher has to at least attempt to get UFT to fight for him.

Ideas that might help in the future....Teachers should keep detailed logs everytime a supervisor comes in....and they should ask for a follow up face to face meeting...take notes and follow up w/ an email detailing what transpired at follow up face to face meeting and end email with "if there is anything I left out, kindly respond and let me know"......this can help to prevent admins from piling on the bullshit at the end of the year.

The more I work under this horrible system the more I realize that we need to be proactive rather than reactive. For example, if teacher had communication logs with parents/guidance counsellors/admins etc....detailing how teacher has expressed concern for "Johnny's" inability to stay "engaged" or complete tasks etc....it sure wouldn't hurt that teacher's case when the U rating appeal comes around.

i advise the teachers in my school to make cover-your-ass written communication a part of their daily routine. For those teachers who think they can lay low and hope that the mean admin won't target them....they are fooling themselves....it's just the opposite....be a thorn....request meetings, discuss concerns about children ...involve all support staff....request IST's and have your own lesson plans in order...make it as difficult as possible for them to portray you in a negative light at a U rating appeal.

If your teacher has an "s" formal ob and a bunch of "U" informals....when was the teacher advised of U on informals....if he was advised of U each time and waited til now....he was not proactive and it'll be more difficult for him during the appeal. Did admin give any support or suggestions after giving U informals?

Here's some answers to some of your questions:

#1--Is it a waste of time? To be honest with you, over the past 7-8 years I have had about 20 people get a U rating. (I am a CL in an elementary school). I am pretty sure almost all of them didn't go anywhere. The only one that got satisfaction was a probationer who, in her third year got a U rating based on one letter to file (corporal punishment which was unsubstantiated). She hired her own lawyer and eventually won. After that year though, she didn't work for the DOE. When she won her case, she got back pay and was awarded reinstatement and everything about the corp. punish. had to be pulled from the system and her file. She never returned because she was moving to Florida. The CP was she pinned a note to a child's shirt, a 2nd grader, which was folded so the writing on the note was not even showing, so he would remember to give it to the parent. The parent saw the note and told the teacher thank you. A few days later, the principal trumped up charges about corporal punishment.

#2--I've been told that probationers should file the appeal but they have less of a leg to stand on. I would make sure that the probation was not discontinued.

#3--Believe or not my principal usually writes on top of the observation INFORMAL OBSERVATION when it is informal. Otherwise there really isn't a way to tell.

#5--Salary freezes--The chapter leaders handbook, under "Due process/ratings/summons" pg 96, Consequences of a U-rating. The first statement reads: "A pedagogue who has not reached the maximum pay step may be denied salary increments for one year."

And from a former CL:

I'm not longer a chapter leader as of June 2005, I transferred to another school, but I still keep notes in a binder. The following is an excerpt of a form letter I had for u-rated staff.

The consequences of a U rating is as follows according to the 2003 edition of the Chapter Leader Handbook.

If you have not reached maximum salary, you may be denied a salary increment for one year.

You may be denied another license based on this rating.

If you are probationary, you may be denied tenure,

You can be transferred to another school with your permission, or you can remain at your current school.

The receipt of a U rating may result in the person being required to take two courses designated by the principal, appropriate to the reason for the rating.

If this one is actually quoted from the CL manual, I strongly object to its use of the word "may." I don't know in what universe you'd find a U-rated teacher getting an expected salary increment these days.

To be fair, someone who contacted Scott did say that the appeals in their experience were nearly always successful. I don't know about that . . .

I left a comment of my own over on Ednotes. If you have anything to contribute to this thread, please jump in. Post a comment here or there, or send either of us an email (at normsco@gmail.com or UnderAssault@earthlink.net).

We're definitely all in this together.