Tightening up the message — finally!

It's been infuriating watching Bernie and the progressive Dems who back his Medicare for All "single-payer" bill explain it to the voting public. 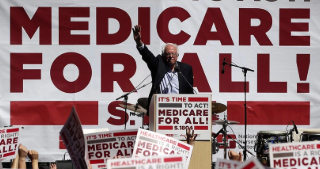 Bernie's my guy, I'm not changing that. His track record is enormous.

But, here's the kind of thing that goes on.


In the CNN debates Bernie got asked the question: "Will taxes go up for the middle class?" (at 00:14). His answer: "You're quite right. We have a new vision for America," and then the usual litany of numbers and statistics, all of which we've heard for half a decade and none of which work for people who want hard answers.

In this video of Bernie stumping in Iowa a week ago, he starts the subject of healthcare at 10:23 with that normal stream of statistics, then poses the rhetorical question at 10:43:  "Why do we spend so much on healthcare?"

What follows is a slew of more large numbers, a couple of repeats of the question, some audience interaction, a false start at 11:31 to try to answer the question, and an additional run of large numbers on spending, lobbying, profits, the high cost of insulin, drug companies overcharging, price-fixing, a corrupt industry, which as president he says he intends to address.

Now we're at 12:50, and he poses another rhetorical question: "Is healthcare a human right?" Which leads to more fluffy stuff about what other countries have and what false friends the insurance companies are. Muddying the issue still further at 14:38, he compares his new bill to Medicare — yes, the government program seniors have now — saying he wants to make that better, that he'd phase it in to cover everyone in the country over the next four years.

What a mess. NPR cites a KFF Tracking poll that shows how confused people really are:


Polling has shown that many Americans don't understand that private insurance would largely disappear under "Medicare for All."

You simply can't answer the question: "Will it raise taxes" with a simple "Yes." People stop listening once you say that. 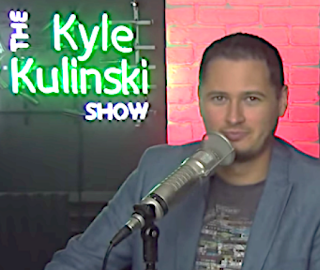 The best answer on the campaign trail is a sledgehammer of an argument, like the way Kyle Kulinski put it in today's video post of Secular Talk: "It's actually a tax cut."

Kulinsky attributes that to Nina Turner, who was apparently on the road in Iowa this past weekend campaigning for Bernie. He says, and I'm paraphrasing here:


If you get rid of the private "taxes" (i.e., what you pay to the insurance companies) and they're more expensive, and you raise the public taxes, there's a net savings. That's an effective tax cut. 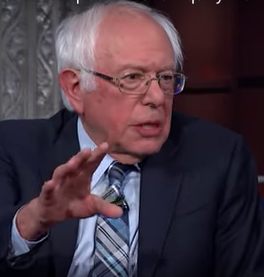 On Stephen Colbert a few days ago, he did a good job. Healthcare starts at 05:58 or so, and at 06:35 Colbert asks: "Is there an increase in taxes on the middle class to pay for Medicare for All, or rather, where would the tax burden go to pay for that?"

His answer this time so much better:


Under my legislation ... nobody in America will pay any more premiums. [fluff]  No more copayments — gone. No more out-of-pocket expenses — gone. Nobody will go bankrupt [fluff] — all of that is gone. Nobody in America under my bill will pay more than $200 a year in total for their prescription drugs, and we'll stop the ripping off of the American people by the pharmaceutical industry. Now, having said that, is healthcare free?  No, it is not.  So what we do is exempt the first $29,000 of a person's income — you make less than $29,000 you pay nothing in taxes — above that, in a progressive way, with the wealthiest people in this country paying the largest percentage, people do pay more in taxes. But, if I say to you that right now you're paying $20,000 a year in a tax called a "premium" for the insurance companies, that's gone, and I say Stephen, you're paying $10,000 a year now to the federal government, you're $10,000 to the good, you'd ask me "Where do I sign up for that."

I'd love to see a lot more of this approach, and far less of the damn billions and billions and top 1% we've been getting from him for half a decade.