Jordan Chariton has just posted some important reflections regarding Elizabeth Warren's positioning on "single-payer."  Not that her backpedaling hasn't been pointed out years ago, because it has (examples: here and here).

His point is that the "problem with Elizabeth Warren isn't that she doesn't on paper have good plans now. The problem is we don't know if she's actually going to fight for the things she is proposing now." 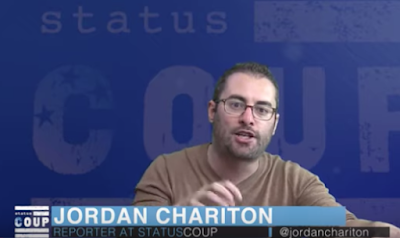 In the video he's mounted on Status Coup, there's some text and bits of Jim Braude's earlier interview on Broadside showing where the senator advocated specifically for single-payer in 2008 — see the first 5 lines of her campaign's Feb. 6th post in Facebook in the screenshot below. Four years later, he says, Warren ran against that position (video clip beginning 01:02).

At 02:58, Braude asks Warren directly for her "philosophy": Would single-payer be her position?  She dodges that entirely with "I think you gotta stay with what's possible ... we need to consolidate our gains around what we've got." Even when he presses her with text of her own 2008 words, she offfers more of the same: "We've got to keep moving in the direction of getting more families covered [etc.]"

As fervently as Warren once advocated single-payer, she equally or even more fervently in 2012 fought to hold onto the Affordable Care Act:  we should "stay with what's possible."

Chariton is totally correct:  Warren changes her position and changes her conviction, which contributes to "a slow, gradual death of incrementalism."

Her words always sound rational, but she squirms with political expediency just like the rest of them*

and Progressives are tired of the backstepping, the centrism, and the half measures that bring no relief from the relentless corporatism, personal financial burdens, and discriminatory choices built into the current for-profit system. It doesn't, won't and can't work for all until the underlying structure is torn down and rebuilt.