Is your union backing Medicare for All? Ours not so much


UPDATE:  Norm has just published a related article in the Oct/Nov issue of EdNotes,
which he’s circulating at the DA. It’s also posted here on his blog.


Although ThinkProgress ended its run as an “independent journalistic enterprise” last month (director’s statement here), it’s worth drawing everyone’s attention to their analysis of how the unions position themselves on Medicare for All.

Bottom line: Sometimes not at all clear.
Words like hedging, ambiguous, two-faced, shifty, and incremental come to mind, and our union’s position smacks a little of all of these.

In any case, here’s some back-up quotes from the national unions, beginning with the ones opposing the Medicare for All legislation.  Obviously, this compilation will need expanding and/or amending from time to time.


Schaitberger: “We cannot support the notion that our members ... should be forced to give it away in favor of a government-run program”


Trumka: “You can’t ask the American worker, who sacrificed wages and everything, to simply say: ‘Okay, I’ll accept this plan here.’”

Trumka, telling Fox News: “While single-payer health care is the way of the future, any plan for the present must allow union workers to keep the plans they fought and sacrificed for.”

• Communications Workers of America (CWA): nope, fix what we got 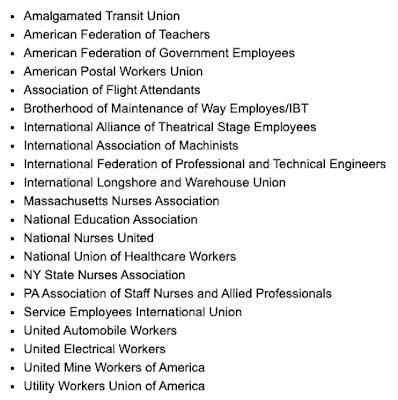 PRESUMABLY ENDORSING the House Bill, working off
LaborforSinglePayer’s list on the right.  I googled around for policy quotes, and in some cases couldn’t find anything solid.


Convention statement Oct 2019: delegates overwhelmingly passed resolutions including “supporting the Medicare for All Act of 2019”


Weingarten: “Medicare for All is one way to fix the problem.”


Simon: “We recognize that the enormous premiums fed employees are required to pay are far higher that when they’d pay in new taxes under M. for All. They would come out ahead, unequivocally.”


Union statement:  “The APWU adopted a Medicare for All resolution at the 2018 National Convention . . . The APWU is proud to stand with the Labor Campaign for Single Payer and has long supported a shift away from the private health insurance market to a government run program.” They also just endorsed him on January 30.


Nelson: says there is broad support in the labor movement for it; backs universal coverage; told Politico that health plans are a “huge drag” on their bargaining

• Brotherhood (BMWED-IBT, a div. of the Teamsters): Yes

• IATSE (Theatrical Stage):  on the list for yes, but I can’t find a statement


Martinez: “A single-payer system ... is the only afforable way to guarantee quality health care for all Americans. I urge you to support ... H.R. 1384.”


Press release, Sept. 2017:  “Today ... formally announced its backing of the Medicare for All Act of 2017, a bill sponsored by Vermont Senator Bernie Sanders”


Website post, Feb 2017: “The ILWU has been advocating for a national, single-payer health plan since 1938, and remains active in that effort.”


Policy statement:  “Our health care system is broken ... Medicare for All Act of 2019 ... would expand our current Medicare system to provide high-quality, comprehensive health care to everyone.”


Press release April 2019: “... we enthusiastically welcome today’s introduction of the Medicare for All Act of 2019 by Ernie Sanders ... the most sensible solution to our nation’s broken health care system.”


LeftVoice reports in Sept 2019:  “refuses to support anything outside of status-quo liberal politics”

Frane: “We are supporting any policy proposal or legislation that moves us in the direction of universal coverage.”

Call for action: call your Congressmen and tell them to co-sponsor HR 1384


Roberts: “Let me tell you what you need in this country — you need national, single-payer, Medicare for All.”


Press release April 2019: “Utility Workers Applaud Introduction of Medicare for All Act of 2019:  Passage of a single-payer national health insurance model would be an important step toward leveling the playing field between rich and poor, sick and healthy and young and old.”


There are some signs of hope.
Members of the Mass. AFL-CIO passed a resolution to endorse a prez candidate only on the condition they’d support Medicare for All (the Intercept, Oct. 9, 2019).
And some unions are fighting back against a centrist Democratic claim that Medicare for All would “undo the hard-won collective bargaining gains of unions.” (Common Dreams, Aug. 2, 2019).